The parallels between Donald Trump’s despicable claims of election fraud and the Dolchstoßlegende are real, but there is one important difference: Whenever one talks about 20th century German history and the rise of the Nazis, of course anti-Semitism must be front and center. I want to make clear Trump’s war on the truth of his defeat—unlike the German phenomenon under discussion here—has not included anti-Semitic language or targeted Jews as a group in any direct way. Nevertheless, it is clear that Trump is blowing racist dogwhistles when he talks about illegal voting and other “bad things” relating to election integrity that “happen in Philadelphia.” We know that when he brings up Philadelphia, he means “Black people.”Now let’s explore the parallels. The most basic one—as well as the most dangerous—is that both phenomena represent a denial of reality aimed at destabilizing a democracy. Rather than rehash the manifold examples of Trump’s despicable post-election deeds—widely derided as echoing those of strongmen for whom he has—for years—expressed a downright creepy level of admiration—I’ll instead cite the damning assessment of their long-term impact leveled by Michael J. Abramowitz, the president of Freedom House—“an organization dedicated to the expansion of freedom and democracy around the world.” Abramowitz states: “by convincing a large part of the population that there was widespread fraud, [Trump] is seeding a myth that could endure for years and contribute to an erosion of public confidence in our electoral system.”- Advertisement – Even after the votes had been cast, that belief was still out there. According to an Axios poll done over the two days following Election Day, 37% of people who voted for Trump thought he had defeated Biden. Politico found that 70% of Republican respondents polled after the race was called for Biden didn’t think the election was “free and fair.” Another YouGov poll found that 86% of Trump voters rejected the notion that Biden had won the election fairly. As Charles Blow pointed out, that represents over 62 million voters.- Advertisement – Just as Trump refuses to accept his defeat in the recent election, in the years after World War I, many on the right refused to accept their country’s defeat on the battlefield. In the case of Germany, that refusal helped to fatally weaken the democracy that emerged after 1918. Fourteen years after World War I ended, Adolf Hitler became Germany’s Fuhrer. But where did the “stab in the back” myth come from in the first place?By the fall of 1918, thanks in large part to the arrival of hundreds of thousands of fresh, well-equipped American troops, the military position of the German empire and its allies began to collapse. After the German army’s Hindenburg Line along the Western Front was broken in late September and early October, Berlin requested negotiations for an armistice, which was signed and famously went into effect at the eleventh hour on the eleventh day of the eleventh month. (Absurdly, 3,000 soldiers were killed in the six hours after the agreement to end hostilities was signed but before it took effect, including Henry Gunther, the last American.) The war came to an end, and Germany lost. Sounds fairly straightforward. But there was one problem: Some Germans didn’t want to believe it.One of the most important reasons for this disbelief is that the defeat directly contradicted the information most Germans had been fed throughout the war about their prospects for victory. Alan Kramer, professor of history at Trinity College in Dublin, Ireland, explains why the news of defeat engendered such a broad rejection of what really happened.Knowledge of the perilous condition of the front had been kept secret from the German people. Strict censorship and the army’s daily false news bulletins meant that news of the armistice came as a shock.This too was important to bear in mind. With minor exceptions in 1914, the war had not been fought on German territory. Unlike the devastation visited on its enemies, the German population was spared direct violence and destruction, and had the benefit of the exploitation of the resources of occupied northern France, Belgium, Poland, Serbia, Romania, northern Italy and the Ukraine, though most of that was enjoyed by the army. The German people had no “ocular proof” of defeat.This cognitive dissonance produced the “repressed defeat”: the denial of the fact of the military debacle.- Advertisement – Here we see another striking parallel between the Dolchstoßlegende and Trump’s current campaign of lies: deceptive propaganda. Throughout the 2020 presidential campaign, the current occupant of the White House and his sycophants in the right-wing media kept saying Trump was winning, that the real polls were showing him in the lead, and that other polls were “fake news.” He incredulously—to anyone seeing things objectively at least—claimed that polls showing Joe Biden in the lead were the real voter “suppression”—as opposed to the actions his Republican Party were taking before the election all over America to actually suppress votes.On the eve of the election, a YouGov poll found that half of all Republican voters believed Trump would “definitely win,” and another quarter of them believed he would “probably win.” 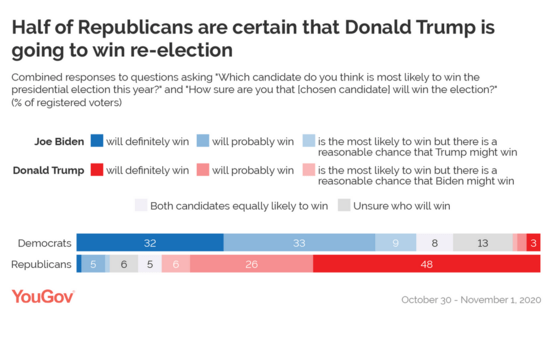